We’ve all been duped. What we’ve been told time and again has permeated our thinking, and now we simply accept it as true. We’ve all bought into a theory that starting pitching – especially, spending big bucks on it – will give a team the greatest number of wins.

However, this theory has one giant problem: it just doesn’t add up. When looking at the composition of a team, the percentage of payroll that goes toward starting pitching would appear to have nothing to do with how many wins the team ends up with.

Take a look at some percentages, based on 2012 starting rosters and final results (these are estimates based on USA Today salary records): 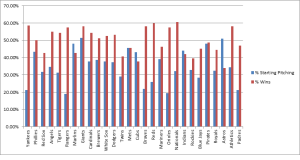 Look at the Rangers, Braves, Reds, and Orioles in particular (you can include the Yankees, too, if you want, though the total they spent on pitching was more than double that of the Braves). Now look at the Phillies, Red Sox, Marlins, and Mets. Notice something strange?

Contrary to what you would expect, the four teams who used less of their budget on starting pitching made the playoffs. There is really only one legitimate excuse as to why the teams who spent more on starters underachieved – injury. While the Phillies were certainly in that camp, though, I don’t think it gets them out of this startling possibility: perhaps the “best” pitchers are not worth their money in comparison to “lesser” pitchers who are still moderately effective.

In the rush for the best available players, teams needlessly bid each other to the sky. Perhaps I’m the lone voice here. Or maybe it’s just me and Billy Beane. But I’m starting to think that the salary of an elite starter can hold a team down – or, at the very least, be far less effective than what general managers are prone to believe.

The Dodgers signing Zack Greinke to a six-year, $147 million contract is indicative of this pervasive mindset. Dodgers ownership decided to throw money at the best available option, justifying the deal by saying it would solidify the rotation and they would continue to stay in games.

I don’t know about anyone else, but if I were trying to be the most efficient with my money (especially if I were in a smaller market), I would much rather take a starter with an ERA half a run higher for a third of the price.

I know there’s a whole lot more to this discussion, but this is one element that just blows me away.

3 thoughts on “Greinke for How Much?”